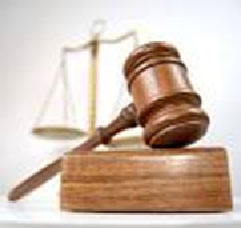 <![CDATA[On Monday 11 August, Doctors for Life's (DFL's) court Application for the Review of the granting by ICASA to On Digital Media, a license to air television pay channels for the sole purpose of broadcasting pornographic material, will be heard. The Application was lodged in the North Gauteng High Court at the beginning of the year. Two other applicants have lodged applications in the same matter. One was in the Western Cape High Court and the parties agreed that the case be transferred to the Western Cape High Court. The legal team that DFL instructed to challenge the decision of ICASA to allow pornography to be broadcasted over television in South Africa, is made up of two advocates, Adv. Reg Willis and Adv. Albert Mooi, and Two attorneys, Stephen Schneider of KZN (where DFL has its head office) and Naomi Marais of Gauteng. <strong>Issues to be heard include: The Application is, in the first instance, a Review of the decision of ICASA, with a request to court to set aside the license, on the grounds that incorrect procedure was followed, amongst others:

DFL is of the opinion that, as DFL was at the hearing and had compelling, non-moralistic, medical and scientific evidence to put before the hearing of the harmful effects of pornography on the brain, comparable to the effects of hard-line drugs such as LSD, heroin and cocaine, DFL was not given adequate opportunity to put this evidence before ICASA. DFL will place before court scientific and medical evidence on the harmful effect of pornography by way of five expert witnesses as follows: Mr Iyavar Chetty: formerly Director of the Film and Publications Board who testifies as to the reasons for existing legislation to protect society, and especially children, against pornography Other experts include, Dr Donald Hilton, Prof. Tuviah Zabow,Professor Mary Anne Leyden and Prof Riesman Further arguments on the merits will include : In summary: pornography is medically proven to be harmful to the brain, both for adults but especially for children, causing structural damage to the brain with enormous consequences for the individual and ultimately for society as a whole. It also has an addictive effect on the human being that can be likened to hard drugs, which addiction is difficult to overcome without specialized and intensive treatment. On top of that DFL has provided expert evidence that demonstrates the security measures to be hopelessly insufficient. That especially so in the light of the fact that the computer skills of minors most of the time far exceeds that of their parents. Added to that is the fact that bringing porn into the living rooms of South African households and expecting parents to send the kids out off the room certain times of the day, having to lock the doors and close the curtains so that the kids can’t peep at the shows, is bizarre harmful to any family.]]>