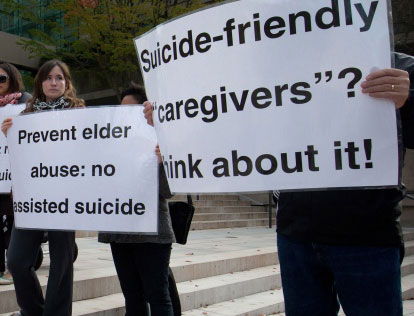 <![CDATA[Doctors For Life does not understand why the legalization of suicide is being promoted in South Africa, as is not possible to prosecute a person who commits suicide anyway. Moreover, Doctors For Life strongly objects to doctors having to do the dirty work. Suicide is contagious. In light of the recent news reports on the suicide of Robin Williams many experts on media ethics such as Sharon Mallon of Open University and Dr. Mike Jempson, lecturer at the University of West England were outraged by the way the media portrayed his suicide. They said that reporting and speaking of suicide flippantly is dangerous and that it leads to already vulnerable people making bad decisions. Australian Dr. Nitschke, also known as Dr. Death said in a news statement that even with the bad publicity surrounding euthanasia he is still inundated with requests from people on how to commit suicide. His only concern seems to be that it is only older people asking for assistance to commit suicide and not teenagers! Suicide contagion is the process by which a prior suicide facilitates the occurrence of a subsequent suicide. In addition to contagion through being exposed to media reports of suicide, contagion can also occur through exposure to suicide or suicidal behaviors within families or peer groups. Suicide contagion affects individuals already at risk for suicide and is linked to an increase in suicidal behaviors, especially among adolescents and young adults. Many studies indicate that suicide contagion and imitating suicides are real. Some studies show an increase in rates of completed suicides and attempts after news accounts of suicide, while other studies show that fictional TV shows with suicide content also have an impact on rates of suicide and attempts. Suicide reporting in the media can contribute to suicide contagion, and newspaper and television reports of suicide have been linked to increased suicide rates. The degree to which rates increase is a function of the amount, duration and prominence of the media coverage of suicide. Suicide is certainly a public health problem that stands out as being preventable. Doctors For Life also feels that real compassion and not euthanasia is the answer for end of life decisions. Terminally ill patients usually go through a period of depression, which is often missed. Those who seriously consider the option are much more likely to be driven by depression than by unrelenting pain. In fact 75 {01b0879e117dd7326006b2e84bcaac7e8fa1509c5c67baf2c9eb498fe06caff4} of elderly suicide victims had seen a physician in the month before their death but their depression went undiagnosed or was under treated. Pain is cited as the only justification in just 5{01b0879e117dd7326006b2e84bcaac7e8fa1509c5c67baf2c9eb498fe06caff4} of euthanasia cases and is only indicated as a contributing factor in fewer than half. There is already pressure from bioethicists who say that society is abandoning patient centered bioethics and does what is best for all parties concerned, that it’s wrong for a family member to choose what they want for themselves, and that some burdens are just too much to ask other family members to bear. Well known Dutch Professor of Ethics Theo Boer, has publicly stated that Holland made a mistake with their euthanasia laws and that going back is far more difficult than preventing euthanasia in the first place. He cautioned other countries to not make the same mistake. Doctors For Life cannot understand why some South African’s still want to rush into this while others who have tried it are backpedaling. Lets look at the situation holistically and assess it from the point of view of what is best for everyone, not just a handful of people. Then maybe one day in the future we can say we were able to help the Oriani-Ambrosini’s, the Craig Shonegeval’s and the Robin Williams’ to live, rather than discussing their suicides in the media. Doctors For Life International is an association of more than 1600 specialists and medical doctors. Doctors For endeavors to promote public health by upholding sound science in the medical profession. For more information, please visit www.doctorsforlife.co.za ]]&gt; </p>