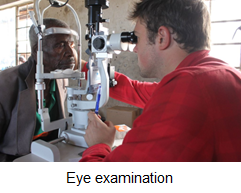 <![CDATA[ <h2 align="CENTER">From the CEO’s desk The year 2014 ended on a victorious note for us here at Doctors for Life. It was indeed a blessed year and we are thankful towards our Heavenly Father for supplying all our needs. We indeed look forward to the many challenges ahead of us in 2015. With your support and prayers we will endeavour to fulfill our vision of helping those in need. Although we don’t live in optimistic times we are amazed at the doors that are opening up and the blessed way in which we are able to deliver services to the needy. One of the most rewarding things in life, as individuals, is to make a difference in the lives of other people, even if it means sometimes leaving our comfort zone. Obstacles seem small when we experience the rewards of our efforts. Thanks to our sponsors and other members who make it possible for us to continue with the work.

“A journey of a thousand miles must begin with a single step.”

Doctors For Life wins Court Application against Starsat and ICASA

In last year’s application which Doctors for Life (DFL) brought for the review of the granting of a license by ICASA (broadcasting authority) for three TV channels for the exclusive broadcast of pornography, judgment in the Western Cape High Court went against Online Digital Media (ODM), owner of the Starsat brand (formally TopTV) and ICASA .

Although DFL is disappointed that the judge did not find it necessary to go into the merits and desirability of airing pornography over television, about which DFL had made a case proving scientifically that pornography is physically harmful for the human brain, it is none the less pleased that the judge held that there was an error in law in the course of the procedure followed by ICASA in granting the license.

Should the appeal court grant Starsat leave to appeal, we shall be faced with a full appeal in the Supreme Court of Appeal with the legal team transferring its endeavors to Bloemfontein. Please continue to pray for victory against this evil. DFL’s legal team consisted of Advocates Reg Willis and Albert Mooij, as instructed by attorney S J M Schneider assisted by Naomi Marais.

A large segment of the population has serious concerns about the effects of pornography in society and challenges its public use and acceptance. There are many different opinions but one consistent finding is that adults prefer to have the material restricted from children, the production of it as well as the use of it. To produce pornography you need actors and in this case children are used. The vast majority of children who appear in child pornography have not been abducted or physically forced to participate. [1] In most cases they know the producer—it may even be their father—and are manipulated into taking part by more subtle means. Nevertheless, to be the subject of child pornography can have devastating physical, social, and psychological effects on children.[2]

The children portrayed in child pornography are first victimized when their abuse is perpetrated and recorded. They are further victimized each time that record is accessed. In one study,[3] 100 victims of child pornography were interviewed about the effects of their exploitation—at the time it occurred and in later years. Referring to when the abuse was taking place, victims described the physical pain (e.g., around the genitals), accompanying somatic symptoms (such as headaches, loss of appetite, and sleeplessness), and feelings of psychological distress (emotional isolation, anxiety, and fear). However, most also felt a pressure to cooperate with the offender and not to disclose the offense, both out of loyalty to the offender and a sense of shame about their own behavior. Only five cases were ultimately reported to authorities. In later years, the victims reported that initial feelings of shame and anxiety did not fade but intensified to feelings of deep despair, worthlessness, and hopelessness. Their experience had provided them with a distorted model of sexuality, and many had particular difficulties in establishing and maintaining healthy emotional and sexual relationships.

For more information go to the following website: http://www.popcenter.org/problems/child_pornography/2

Abortion: things they never tell us

The abortion debate is the ongoing controversy surrounding the moral and legal status of abortion. The two main groups involved in the abortion debate are the self-described “pro-choice” movement (emphasizing the right of women to choose whether to abort a pregnancy or to grow it to term) and the self-described “pro-life” movement (emphasizing the right of the embryo or fetus to gestate and be born). Both of these ascription’s are considered loaded terms in mainstream media where terms such as “abortion rights” or “anti-abortion” are generally preferred.[1] Each movement has, with varying results, sought to influence public opinion and to attain legal support for its position, with small numbers of anti-abortion advocates sometimes using violence.

Abortion law varies between jurisdictions. For example, in Canada abortion is available to women without any legal restrictions,[2] while in Ireland abortions are illegal except when a woman’s life is at imminent risk[3] and Chile bans abortion with no exception for the life of the pregnant woman.[4]

The emotional and psychological effect on women who has, had an abortion often outweighs the immediate physical advantages experienced by such women. Some regret the abortion soon after it has happened and some only years after the abortion.

The following is a list of potential emotional and psychological side effects of an abortion. The intensity or duration of these effects will vary from one person to another. Potential side effects include: [5]

2. Dictionary.com. Retrieved 2007-05-01. (1) the right of a woman to have an abortion during the first six months of a pregnancy; (2) an abortion performed on a woman solely at her own request

5. Adler, Nancy. (1989) University of California at San Francisco, Statement on Behalf of the

American Psychological Association before the Human Resources and Intergovernmental Relations

Subcommittee of the Committee on Governmental Operations, U.S. House of Representatives:

About 3 months ago I was asked to visit a family that lives about 40 to 50 km away from Sehane/Zavora in Mozambique. The family was inquiring about the Gospel. They are related to a family that comes to our services. We arranged for a specific day and arrived a little late. The place is on the Southern side of the Poelela Lake in the bush. When we arrived there were a great number of people. They were just starting to eat. We were greeted very warmly and they invited us to eat with them. After the meal the leader of the family told me he had invited all his close family and friends and that they were ready to hear what God had to say to them. This was very special and a few people came for help after the service. I visited them again just before I came to South Africa and they have also started to visit us. There are many spiritual needs in these areas. As far as I am concerned the greatest problem is poverty and it is mostly caused by ancestor worship and witchcraft. Regarding our needs at the Clinic we are in need of a Christian medical doctor and nursing sisters. There are people interested. We will see how the Lord leads We also need volunteers that can help with general maintenance work. Mario Rocha, permanent DFL worker stationed at Zavora clinic

Our medical outreach program, Aid to Africa, seems to have a full year ahead. But first we would like to give some feedback on 2014. By God’s grace we were able to reach 5 needy areas in neighboring countries with the main focus on eye surgery: 2. Maun (and Ghantsi) in Botswana

Altogether we performed 423 surgical procedures (an annual record) of which most were cataract surgery on blind people. 652 prescription eye glasses were handed out and 212 internal medicine examinations (GP examinations) could be performed. We have on record an estimated 1889 eye examinations that were done. Due to intensive eye campaigns done in Botswana and Mozambique there were many more examinations but we do not have a record of all of them because we did not received the stats from the governments involved.

AT our Zavora clinic and Maternity ward in Mozambique we examined and treated roughly 18 391 patients compared to only 12 916 during 2013. Of these most were malaria cases (3594). We also had about 231 babies delivered bringing the total to about 889 since the opening of the clinic.

During 2014 we also were able to source an A-scan, Keratometer and Autorefractor in order to do biometry during the cataract surgery camps. We also received another eye microscope for eye surgery.

Looking at 2015, March has been put aside for medical congress exhibitions where DFL has an opportunity to recruit volunteers for this year’s medical outreaches. The congresses include the Ophthalmological Society of South Africa (OSSA), and for the first time The South African Dental Association (SADA), both at the ICC in Durban. As in the past, we also hope to attend the South African Medical Association (SAMA) later in the year. Please come to visit our booth if you are there.

While our Zavora clinic and maternity ward continues to operate in Mozambique we are desperately in need of medical volunteers to help there. We currently don’t have someone there accept for the local Mozambique staff. We especially need nurses, midwives and GP’s. Please contact us if you are interested or know of someone who might be.

We are also planning at least 4 short term medical outreaches for 2015 with the first one in July to Malawi. Although the focus will be eye surgery we are also looking for dentists and GP’s to join us.

Next in line is an eye surgery camp in Xai-Xai in Mozambique where we hope to do about 100 cataract operations. Later in the year in about October and November we hope to reach remote areas in Zambia, Angola or Botswana. If you are interested in getting involved in any of these please let us know.

Thank you for all your prayers and support.

In Genesis 27:30: we read that Esau said …………. “Please, father, sit up and eat some of the meat that I have brought you, so that you can give me your blessing.”

Esau had a strange way about him. He kept honoring the faith of his fathers in the sense that he did not go to the idols for a blessing. At least not as far as we know. No, he went to his father Isaac. And he was quite desperate for it, in the sense that he cried out loud and wept in order to get it. But there was another side to Esau. When it came to marriage he wanted to select a girl after his own liking and not after God’s guidance. We read that it grieved Isaac and Rebecca that he chose a wife from the Hittites. Therefore the Bible calls him profane. Throughout his life he intimated that he neither desired the blessing nor dreaded the curse of God. To be profane is to combine the sacred and the blasphemous. He wanted the Lord’s blessing while living his life as he choose. Esau is a typical example of the generation of today. May the Lord grant us the grace to be different. To live lives that are holy and totally surrendered to God’s will. What were our lives like during the previous year and what about 2015?

About Doctors For life

[su_box title="About Doctors For life"]Doctors For Life International is a non-governmental and registered Non-Profit making Organization (NPO) established in 1991. We bring together medical professionals to form a united front to uphold the following three principles: · The sanctity of life from conception till death · Sound science in the medical profession · A Basic Christian ethic in the medical profession Contact details PO Box 6613 Phone +27 (32) 4815550 or 1/2/3 Zimbali Fax +27 (32) 4815554 4418 Email: [email protected] South Africa web: www.doctorsforlife.co.za[/su_box]

· God’s blessing on the work

· Laborers to send into the field