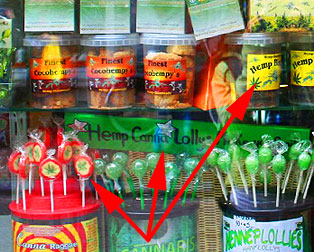 Dagga confectionery and sweets for sale[/caption] An article in CNN today, appears to mirror the recent incident in Orange Farm where a school girl had to be admitted after accidentally eating a Dagga (Cannabis) muffin. The article reports on a 133{01b0879e117dd7326006b2e84bcaac7e8fa1509c5c67baf2c9eb498fe06caff4} increase in the admittance of children to emergency rooms in France after unintentional Cannabis intoxication. Symptoms of intoxication often include sleepiness, difficult breathing, seizures or even coma. Calls to poison control centres related to Cannabis exposure increased by 312{01b0879e117dd7326006b2e84bcaac7e8fa1509c5c67baf2c9eb498fe06caff4}. Dr. Claudett, a paediatric emergency physician from Toulouse warned parents that it could be very dangerous for children to eat such products. “Usually, parents think it’s not very harmful because they’re smoking it, and it relaxes them. But if a child ingests one stick or ball, they can become comatose,” she said. In Colorado, USA, it was found that in states where recreational or medical Cannabis is legal, the number of paediatric Cannabis intoxication cases reported to poison control centres increased by 30{01b0879e117dd7326006b2e84bcaac7e8fa1509c5c67baf2c9eb498fe06caff4} each year from 2005 to 2011. Children in states where Cannabis was legal had more severe symptoms and were more likely to be admitted to a critical care unit compared with those in states where Cannabis was not legal. In light of the extreme dangers of alcohol and tobacco that Professor Nutt has mentioned repetitively in the Pretoria High Court these days, Doctors For Life cannot understand the logic of wanting to let a third harmful illicit drug loose on the South African population. We find no evidence of people switching over to cannabis instead of alcohol in scientific literature. On the contrary, statistics by the Colorado High Intensity Drug Trafficking Area showed that both increased after legalisation. Doctors for Life International represents 1500 medical doctors and specialists, three-quarters of whom practice in South Africa. Since 1991 DFL has been actively promoting sound science in the medical profession and health care that is safe and efficient for all South Africans. For more information visit: http://www.doctorsforlife.co.za]]>