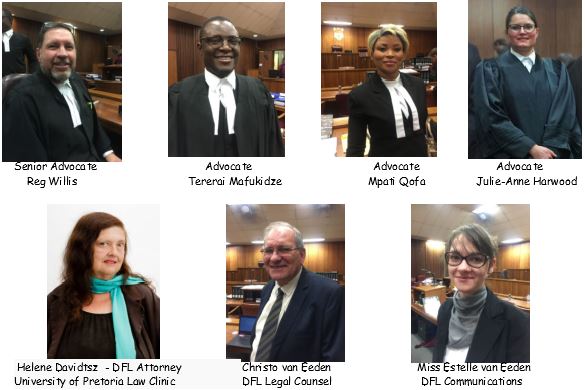 <![CDATA[On Tuesday the 7th of November ten Constitutional Court judges heard argument by various parties on whether or not to confirm the Western Cape High Court judgement delivered earlier this year, which declared the legislation prohibiting dagga possession, use, cultivation and dealing to be unconstitutional to the extent that it does not allow for the possession, cultivation and use of dagga within the privacy of one’s private dwelling. The Western Cape High Court had found that the privacy rights of dagga smokers and users were infringed by the prohibiting legislation and gave parliament 24 months to enact new legislation. That order is of no effect until the constitutional court confirms it as is or varies it. The opposing Minister of Justice and Constitutional development and other government departments appealed the judgement. This case had been brought by the well-known Rastafarian Mr Gareth Prince (and others) who last unsuccessfully challenged the prohibition of dagga in the constitutional Court in 2002, on the ground of religious freedom. The hearing on Tuesday the 7th of November before the Constitutional Court followed closely on the heels of the now infamous “trial of the plant” dagga legalisation case by the so-called dagga couple in the Pretoria High Court which was postponed on 18th August 2017 after three weeks of evidence. Doctors for Life which is the eighth defendant in the trial of the plant, was admitted as First Amicus Curiae (friend of the court) before the Constitutional Court. Doctors for Life supported the appeal of the Minister of Justice and Constitutional Development and various other government departments, against the judgement and its confirmation, and argued that the Western Cape High Court had erred in significant respects in coming to its decision. It is common knowledge that the use of dagga is harmful, but the pro-dagga users argue that it is not for the State nor society to dictate what is good or bad for them. Mr Prince and the parties supporting confirmation of the Western Cape High Court order left court feeling rather confident, notwithstanding the criticisms levelled by the State and Doctors for Life against the High Court judgment. A central theme of this criticism was that the Western Cape High Court had come to its decision without properly considering scientific, medical and social evidence regarding the extent of the harms of dagga use and justifying the prohibition of dagga. Further criticism was the High Court’s failure to properly consider children in a private setting. While much of the arguments advanced and submissions made centred around legal technical issues there were lighter moments when justices asked questions about what would be considered to be legitimate quantities of dagga to use and be in possession of, and how privacy was to be understood in rural environments where one does not find boundary fences and the like. The courtroom was packed with colourful Rastafarians and other culture groups who complain that the prohibition of dagga infringes on their human rights. Apart from the representatives of Doctors for Life, their legal team, and the legal team for the government departments, support for the position that dagga is a social ill deserving of prohibition, was conspicuous by its absence. Notwithstanding the confidence exhibited by the pro-dagga lobby of persons present at the hearing, the Constitutional Court will be calling for further written submissions from the parties on whether it should stay these proceedings pending the outcome of the Pretoria trial, where at least 16 expert witnesses will testify and be cross examined on the extent of the harmfulness and justification for the prohibition of dagga. In the three weeks that this trial ran in Pretoria the evidence of only two expert witnesses was led and cross-examined. The facts underlying the “trial of the plant” are that the first two plaintiffs, the so-called dagga couple, were arrested for possession of 1.87 kg of dagga. The third plaintiff was arrested in consequence of not only possession of dagga but cultivating dagga on a scale beyond what he alleges, namely for personal medicinal purposes. According to the standards of almost all countries and American states (which remain a minority in the world) where dagga possession and use has been legalised or decriminalised, possession of this quantity of dagga would still render them liable to prosecution and possible incarceration in most of those countries/states. The plaintiffs in the Pretoria trial have thus far evaded the factual basis for their constitutional challenge to the legislation prohibiting dagga by leading the evidence of their experts first. This approach is not only evasive but also complicates the work of the legal teams for the State and Doctors for Life in testing the evidence of the expert witnesses because they are not giving their evidence pursuant to a factual basis. This is Doctors for Life's biggest case to date and will cost an estimated R2 million for which a major fundraising effort is ongoing. The advocates for Doctors for Life and the State departments have been unfairly and maliciously vilified by the pro dagga media. Doctors for Life believes that the legalisation of dagga and its resistance is another case of social importance to come before the South African courts. Dates for the resumption of the Pretoria trial will be set soon. <h3>DFL’s Legal Team Advocate Reg Willis. Senior Advocate for DFL