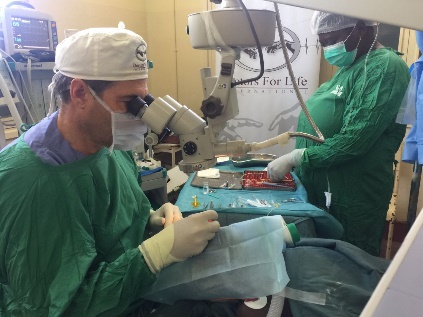 Mrs Angelika Böhmer
This was our third outreach at Inhambane hospital over the past four years and we have built good relationships with the local staff during this period. On our first outreach we were met with a degree of mistrust but this time we experienced a hearty welcome and excellent cooperation from our old friends there. Unfortunately, since our last outreach the local surgeon has left. This makes our intervention even more urgent because no cataract surgeries are done on a regular basis at the hospital anymore and the backlog becomes increasingly larger over time.
Our team consisted of surgeon Dr. J. Pons from the Good Shepherd Hospital in Swaziland assisted by two of his ophthalmic nurses and an administrative lady, four helpers from our clinic at Zavora and two of us from South Africa.
We spent long hours in theatre and were able to do 130 surgeries in five days. The team from Swaziland was very well organized for this mammoth task and it worked like a well-oiled machine! We thank them for their hard work and commitment and financial and other contributions!
I’d like to mention a few highlights: Teresa* (age 34) had become blind due to cataracts some time ago. As a result, her husband left her even though she was pregnant. Her 9 year old son had to do many of the chores and even tried to do some jobs to earn a little bit of money. Life was very difficult for them. After her daughter was born she had to take care of her without being able to see and so a community worker brought her to the hospital. The morning after the surgery there was quite a commotion among the patients and spectators when for the first time this young mother was able to see her little baby who was then already about four months old. It’s easy to imagine what a difference the outreach made in the life of this little family. One of the patients who came for screening was Paolo*, a boy of 10 years old who had a cataract in his left eye. The hospital made an anaesthetist available so that Dr Pons could operate. Children of this age cannot have surgery under local anaesthetic and on other outreaches we have to send them away. We were very happy that we could help him and the next morning he was overjoyed when he could see.
Another highlight for the team was our accommodation and we want to express our heartfelt thanks to the people who made it available to us.
Much more could be said but space is limited. We thank God that we could do the work and that the gospel was preached. We pray His blessing on both.
* Names changed for privacy reasons.

by Miss Mirjam Rüttimann
During the weekend of the 28th to the 30th of July 2017 I was on duty at the maternity ward of the DFL clinic in Zavora and was called to the ward for a delivery. During this time Dr. Deborah and a friend of hers, Rebecca from Germany, were visiting us. They had told me to call them if there were labour cases and so I called them that evening.
While we were busy preparing for the delivery another lady arrived. We only have one bed for deliveries so I put her into the maternity ward. When I checked how far she was with the labour I realized that the baby was laying feet first and this by full cervical dilatation! That’s a fearful diagnosis if one is out in the bush because it means that the lady needs a caesarean immediately. The chances that the baby would survive labour with feet first was not very high. I decided to immediately transfer her to the hospital in Inharrime but as we were preparing the transfer she started to push and the next moment the baby’s legs were out. So we had no chance to transfer her to the hospital and I could just pray that the child would survive the labour. I took the child by the legs and the next moment the child was born. The baby was crying and everything was fine.
Then as we were waiting for the placenta we noticed that something was wrong. I checked again and found that there was another baby coming. It was twins!! I have never had a twin labour in my life, only through a caesarean. Everything went so well that we only can thank God! He is the best doctor and with Him everything is possible.]]>