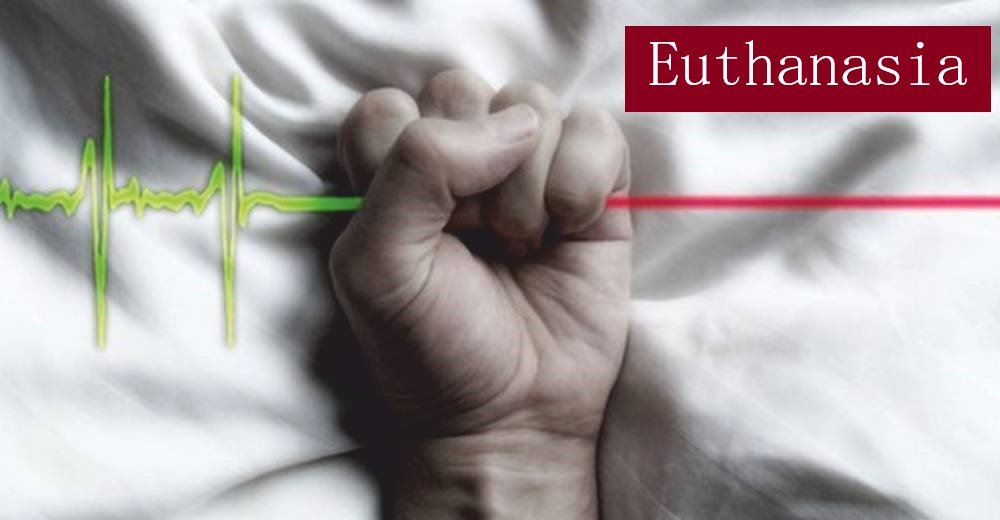 A new paper in The American Journal of Geriatric Psychiatry find that public attitudes to euthanasia for patients with dementia change when they are presented with case studies of individuals with severe dementia who have made an advanced request for euthanasia. An online survey of 1700 US-based participants show 54% supported legalized euthanasia and 22.6% were unsure, but after reading the ethical and practical complexities of the scenarios, support decreased. The study authors say that it is not enough to ask whether advanced request for euthanasia should be legal following a description of life with dementia because it may fail to capture the public’s considered views. Rather, it is important that the public is given insight into the complexities of illnesses like dementia to avoid clouded public views. Read Bioedge, ajgponline

According to Wesley J. Smith, euthanasia destroys the family bond. Imagine your spouse wants to be euthanized and you have no say over it, or if your depressed brother decides to be euthanized and you beg doctors not to kill him, to no avail. Both cases happened in Canada. One involving a wife trying to prevent her husband’s death by euthanasia but lost because the benefit of the doubt goes to death once euthanasia becomes legal. In Oregon a psychiatrist determined that an elderly woman with dementia was mentally unable to consent to assisted suicide, and believed her daughter was pushing for it, but it happened anyway. Read more

In an upcoming referendum a vote on Euthanasia will be done. Pro-euthanasia, unsupported claims have been promoted in the media. Specialist doctor Sinead Donnelly is trained in palliative medicine, who decries the move to make underfunding and overworked staff the reason to euthanize the old and dying. Dr Donnelly says it’s a little like arguing that the car needs a clean so we should push it off a cliff. This “End of Life Choice Act” gives no choice for the patient but to die. The Royal New Zealand College of General Practitioners told Parliament they won’t be able to detect coercion or pressure in all cases with this test, and that there will be wrongful deaths under this law.

“Lawyers for Vulnerable New Zealanders advised that: “… under the Act a person could be dead within only a matter of days after being diagnosed, and without needing to tell any loved ones. There’s no mandatory cooling-off period between a request and the lethal prescription. That’s a serious flaw because terminally ill people can go through a whole range of emotions from day to day. If they’re caught in a moment of weakness and have the wrong people around them they could be dead within 72 hours”.

Every week as doctors we see cases where patients with advanced illnesses with limited prognosis who are also disabled, sick or mentally ill will, at their most vulnerable point, contemplate suicide. With the right care and medicine, the vast majority are brought out of this vulnerable state to a place of health. Under the proposed Act, those same people could be dead within 72 hours.” Read more

In 2016, Canada legalized euthanasia or Medical Aid in dying (MAiD), but since euthanasia was legalized organ donations increased. The CEO, Ronnie Gavsie, of the organization called Trillium insists that euthanasia is totally separate from organ donation and that they only provide the information to the dying patient and wait for them to decide. Yet there is a subtle sense of coercion since in the very next breath Ronnie says “it’s the right thing to do for those no the wait list.” Organs donated by euthanized patients are often of better quality than organs harvested from accident victims. There is more time to test them and find a match with potential recipients.

Wesley J. Smith commented in the National Review saying “The clear message being sent to suicidal, ill, and disabled Canadians – with the active support of the organ transplant community – is that their deaths can have greater value to Canada than their lives.” “Someday, Canada will probably dispense with the euthanasia part altogether and go straight to killing by organ harvesting—already being proposed bioethics and medical journals. Read more

According to an article by Francisco José Contreras, a lecturer in legal philosophy, Euthanasia once legalized will pressure the sick elderly to die. Francisco said that it will be easy to convince the elderly that the final stretch of their life, along with all the difficulties, is not worth being lived and that it is dignified not to impose one’s decay on others – exactly what the Nazi legislation used to justify the extermination of the deficient. In both The Netherlands and Belgium, once euthanasia became legal, the interpretation became increasingly lax. They have evolved from killing only terminally ill patients, to those with chronic illnesses; from killing people with physical illnesses, to people with psychological illnesses; from voluntary cases to killing people without their express permission. Read more

A Belgian court has cleared three doctors accused of murder in the country’s first criminal case concerning euthanasia. The doctors were alleged to have unlawfully poisoned 38-year-old Tine Nys in April 2010 because she did not fulfil the conditions to be euthanized. The deceased’s family said that Nys did not have an incurable mental disorder. Belgian law allows adults to request euthanasia if they are facing unbearable physical or mental suffering resulting from a serious and incurable disorder. In the Netherlands, a doctor was cleared in a trial after being accused of failing to secure proper consent from a woman who had Alzheimer’s disease. Read more

According to a file analysis by the Euthanasia Expertise Center requested by the Ministry of Public Health, Men turn to euthanasia more often because they suffer from addiction problems, and women more often suffered from mood disorders. The average age of women in this study is 50 years, of the men 49. A depressive mood disorder was the most common disorder across the board. Bullying, sexual abuse, or trauma played a role with relatively many patients. Many of these lives could have turned out differently if they had sought out counselling and support. Another example of how euthanasia has crossed the lines and become a slippery slope. Read more

Canada – No one talks about the cons of euthanasia

Hendrik van der Breggen, PhD, retired last year as Associate Professor of Philosophy at Providence University College, Manitoba, Canada. He feels that there are more cons to euthanasia that are often dismissed. For example; with the acceptance and expansion of euthanasia, our society will see suicide as a legitimate way of solving an individual’s problems. Life will no longer be seen as society’s default position. the elderly, terminally ill, disabled, and whoever else is suffering—must justify the continuation of their lives. Why should we spend so much money on healthcare for them? This may not be stated explicitly, but will be an unspoken assumption. Law professor Carter Snead correctly points out, a “subtle coercion.” Adding insult to injury. To those becoming handicapped or infirm we insult them as the most vulnerable with euthanasia by saying: We would rather be dead than be like you! If that isn’t an insult, what is?

If the choice or autonomy of the sufferer constitutes acceptable personal and legal grounds for euthanasia, then will suicide interveners have to add to their script some directions as to where euthanasia is available? Will National Suicide Prevention Week include some Suicide Promotion Days? Will suicide intervention or counselling against suicide become grounds for a lawsuit against the intervener or counsellor? If we kiss good-bye the above portion of the Hippocratic Oath, then we invite a deep change of character to the practice of medicine. Healers will be asked to be killers. Health care becomes careful killing. And those conscientious persons who refuse to kill will be discouraged from practicing medicine.

In view of the above cons, it would be wise for Canadians not to embrace euthanasia. Instead, we should do a better job of providing excellent palliative care—pain relief and life-enhancing dignity—for all who suffer. We should embrace a culture of life, not a culture of death. Read more

German people now have the right to kill themselves at any time and for any reason. The right to a self-determined death is not limited to situations defined by external causes like serious or incurable illnesses, nor does it only apply in certain stages of life or illness. Rather, this right is guaranteed in all stages of a person’s existence. One radical court ruling leads to another. The right to commit suicide could soon become a right to be killed. Since Germany’s absolute right to assist in suicide is open-ended and not limited to doctors, why not permit friends to kill friends? How can the state now restrict the taking and selling of addicting drugs? Drugs may be harmful, but if an autonomous person chooses to spend their days high, how can the state gainsay that decision or inhibit the commercial providers who supply the fixes? A culture that has lost its faith in life cannot comprehend why it should be endured.” If we don’t change our current cultural trajectory, we will become “Germany” too. Read more

Academics have argued how killing patients through assisted suicide in the United Kingdom would save money and provide organs for transplantation in a new report published in the journal of Clinical Ethics. Dr Gordon Macdonald, Chief Executive of Care Not Killing said that this report “exposes the real agenda” of assisted suicide and demonstrates the dangers of legalising assisted suicide and euthanasia. While the authors may not believe money is a motivation for assisted suicide there are some people who do. In the US states of Oregon and Washington the majority of those ending their lives cite fear of being a burden on their families and finances.”  Read more at Lifesitenews, Sagepubjournals

In Texas, a disabled, 46-year old African American man named Michael Hickson, was euthanized without his consent or that of his wife. Michael contracted COVID-19 and was admitted to hospital. Melissa, his wife, was given no choice over whether he lived or died. Melissa recorded her conversation with the doctor who said it was better to euthanize Michael because he is paralyzed and not like “walking and talking people.” Giving her husband food, water, oxygen and medicine would not have been a burdensome treatment, and the hospital had plenty of space. The doctor made clear that the issue was his disability. The National Council on Disability is calling for an investigation into the hospital for violating Michaels civil rights. Read more

USA – Girl kills herself with the help of assisted suicide website

Shawn Shatto who was dealing with depression and anxiety for years and seeing a therapist. A website provided Shawn with lethal directions and encouraged her to die by suicide through cheering her on by telling her what kind of drugs to mix in order to kill herself, and by wishing her ‘good luck and ‘safe travels.’ Shawn’s mom has been advocating for “Shawn’s Law” Which “strengthens penalties against anyone who assists in a suicide, especially anyone under the age of 18 or has a mental disability. Shawn’s Law has passed the House, and is now in the Senate. Read more