Doctors for Life (DFL) is opposed to ‘active’ euthanasia, that is euthanasia that involves the intentional killing of a person, but is not opposed to the patient’s right to refuse medical treatment or ‘passive’ euthanasia.

DFL supports the present ban on active euthanasia in South Africa. We believe that it should be kept because any relaxation would be open to abuse. Active euthanasia could put pressure on the old and the sick to seek early death such that the ‘right to die’ would become the ‘duty to die’ .To distinguish between murder and ‘mercy killing’ would be to cross the line that prohibits any intentional killing, a line that is essential to preserve. We can respect a patient’s right to request to die especially when the patient has an incurable disease that would require extraordinary intervention. We do not, however, support the termination of ordinary treatment such as pain modifiers, antibiotics, food or water. With pain medications available to doctors today, 99% of pain is treatable.In general, arguments in favour of active euthanasia are insufficient to weaken society’s prohibition of intentional killing. We look at quality of life as an intrinsic value and not a qualitative value judged by a second party. We look upon active euthanasia prohibition as the cornerstone of law and of social relationships. It protects each one of us impartially, embodying the belief that all are created equal. We do not wish for protection to be diminished, and we therefore recommend that there should be no change in the law to permit active euthanasia.Finally, we at DFL do not believe that it is possible to set secure limits on voluntary euthanasia. Involuntary euthanasia based on contemporary social evaluations of age (young or old), competence, illness, race, genetic differences would be subject to rampant abuses. It would be next to impossible to ensure that all acts of euthanasia were truly voluntary, and that any liberalization of the law was not abused. Moreover, to create an exception to the general prohibition of intentional killing would inevitably open the way to its further erosion, whether by design, by inadvertence or by the human tendency to test the limits of any regulation.The road to active euthanasia starts with an attitude shift in the medical community. Daniel Callahan in his book What Kind of Life: The Limits of Medical Progress criticized contemporary medicine for shifting its focus from care to cure: ‘The primary assurance we all require is that we will be cared for in our sickness regardless of the likelihood of cure…The greatest failure of contemporary healthcare is that it has tended to overlook this point, has become distracted fro it by the glamour of cure and the war against illness and death. At the center of caring should be commitment never to avert its eyes from, or wash its hands of, someone who is in pain or is suffering, who is disabled or incompetent, who is retarded or demented. 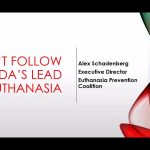 Media Release: Before South Africa Decides to Permit Euthanasia, Consider the Evidence that often Get Glanced Over. 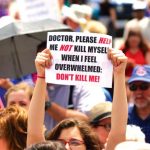